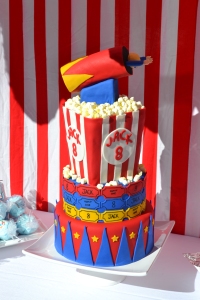 The first fondant covered cake that I ever did was for my son’s 5th birthday party.  It was at that party that another parent mentioned I should sell my cakes, and It Takes the Cake was born!  We decided to recreate the Carnival theme for his 8th birthday, but, of course, not the cake.  I had to go bigger and better for this cake, and as we were discussing what Jack wanted for his cake, my husband, the “idea guy,” thought it would be funny to suggest a man shooting out of a cannon: challenge accepted!!!  I created a few bases for the cake, including a full popcorn bucket with marshmallow “popcorn” and topped it off with Jack, shooting out of a cannon.  As always, the entire cake is edible and the cannon and base are made out of cake as well.  In order to add some extra excitement to the cake, we put sparklers at the end and lit them as everyone was singing happy birthday!  Next year, Jack said he wants the cannon to be functional…